Volunteers are in the forest every week carrying out a range of practical activities that are all linked to supporting red squirrel conservation. Some of these activities include:

CRST is a fully constituted voluntary group with committee representatives made up from the Trust’s wider membership.

Research over the years

Studies of the reds over the years in Clocaenog Forest including a PhD study between 2004 and 2006 showed that there was still a widespread population there. In 2012 a trapping study was undertaken resulted in no reds being caught with only grey squirrels occurring instead. However, sightings and a road traffic accident suggested reds were still present. It was uncertain whether the forest was still home to a sustainable population of red squirrels.

In 2014 several trail cameras and feeder boxes were installed. These were sited near suitable trees or where red squirrels had been sighted in the past.

The cameras were monitored regularly by volunteers. Eventually a red was picked up in the far west of the forest – evidence that a population of some sort, no matter how small, still hung on.

In 2016 a three-year Red Squirrels United (RSU) project started. Red Squirrels Trust Wales (RSTW) was one of the project partners and through them the work in Clocaenog Forest continued. Becky Clews-Roberts began her role of Red Squirrel Ranger in October 2016 and quickly built momentum with a group of enthusiastic and dedicated volunteers who were keen to investigate where the few remaining reds lived.

A total of 50 trail cameras trained on feeder boxes were installed across the forest. This effort was rewarded with several sightings of reds visiting feeders in the west and east of the forest. Becky gave many talks to local groups, schools and delivered or facilitated numerous volunteer training courses and awareness raising activities. Becky’s strategy was to help build local knowledge and confidence regarding red squirrel conservation.

In 2017 NRW and volunteers embarked on a pilot reinforcement to boost the red population. Captive bred reds were sourced from collections across the UK and kept in enclosures in the forest built by volunteers and NRW. Squirrels were held in enclosures, volunteers carried out daily health and welfare checks until release. This included Christmas Day!

Before the release hatches were opened, volunteers installed more cameras and feeders in an arc around the enclosures in the hope of following the reds’ dispersal. The reds didn’t disappoint and we now spend hours sifting through footage of them using the feeders.

The releases were deemed successful as breeding has occurred. There were some fatalities along the way, these were a mix of events including disease, predation and road traffic incidents.

A total of eighteen captive bred and 4 translocated squirrels have been released so far. 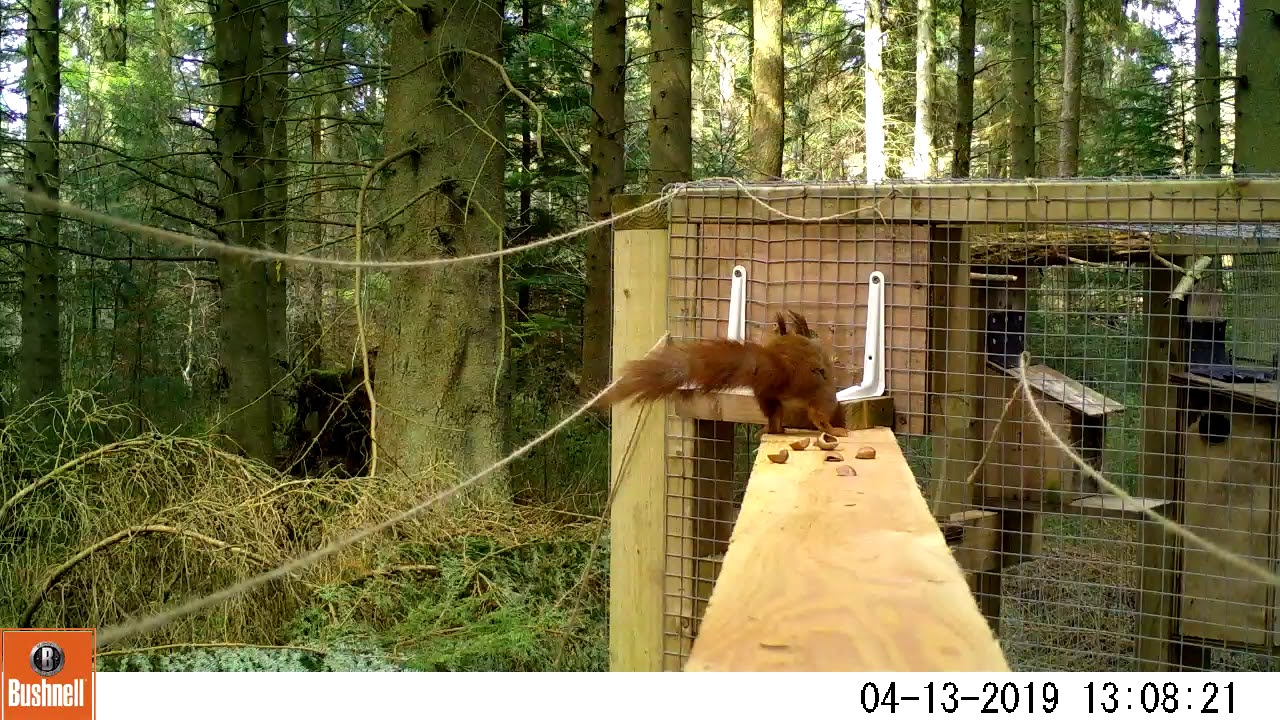 CRST is member of The Wales Squirrel Forum

The Wales Squirrel Forum has existed for a number of years to facilitate dialogue on both red and grey squirrels, influence strategy, link with others and foster collaboration at the appropriate scale. The Forum has input to the Wales Red Squirrel Conservation Plan and its reviews. It was also represented on a Welsh Government working group on the drawing up of their Grey Squirrel Management Action Plan, a requirement of multiple legal commitments.

The remit of the Forum has changed recently. Following a Welsh Government Consultation on their Grey Squirrel Management Action Plan in 2018, the forum now co-ordinates, supports, monitors and assists in the implementation of both the grey and red squirrel plans.

CRST has over 80 cameras placed around the forest. What shows up on the cameras determines how often they are checked. For example, some blocks of cameras are checked every week because animals are very active. Other blocks are only checked every six to eight-weeks because there is little or no activity recorded.

Evidence collected shows that reintroduced and surviving reds had established themselves in the forest. Two of the released females had bred as trail cameras captured images of juveniles around feeders. Because of this, the pilot reinforcement was deemed a success. However, this has to be taken in the context of having a very low red population to start with.

All released animals were micro-chipped and some were fitted with temporary radio collars, (under license). A combination of professional conservationists/ecologists and volunteers (after training) were able to track the whereabouts of a number of released animals. The purpose of this activity was twofold: firstly to monitor their health and welfare and secondly, to determine the range of the newly introduced squirrels and learn about which parts of the forest they preferred to use. Some of this work was supported by The People’s Trust for Endangered Species.

Keen as ever, volunteers and rangers, having attended one of several radio tracking workshops, regularly kept track of our precious charges. Data collected would help NRW to continue to adapt the forest management plan to ensure ongoing red squirrel survival. The batteries in the collars don’t last forever and reds were re-trapped after a designated period to remove all collars.

Following the programme of radio tracking, all red squirrels with collars were re-trapped and their collars removed (under licence). There was then a focus on how to gather data from micro-chips that released animals were carrying.  We identified some specifically designed and adapted radio-frequency identification (RFID) readers that were incorporated into feed boxes. Over a period of 6-months, nine RFIDs were purchased and placed throughout the forest where remote trail camera data had shown red squirrel presence. CRST were only able to do this because money for equipment was generously donated from Cofnod, Denbighshire Council and NRW. We were not disappointed with the results as numerous RFIDs started to record chip reader information from various animals. Coupled with pictures from trail cameras, newly introduced animals were tracked and monitored to see how they were doing.

An RFID feeder records every lift of the lid. If an animal with a microchip lifts the lid, the ID of the chip is recorded on an SD card. Volunteers copy the text files containing the data from the card and then make a record of any micro-chipped animals.

The RFID readers were not without challenges.

As the use of these readers continued, adaptations and modifications were made based on the growing knowledge and experience of CRST volunteers. Feedback is given to the manufacture to help improve the feeders.

Currently, CRST is trialling the latest version of RFID readers following some modifications. The new reader has improved waterproofing and can now weigh any animal that sits on the feeder box platform. This will be valuable information as we continue to gather crucial data about the health and welfare of the red squirrels.

The information from camera checks determines how we use valuable (and limited) volunteer resources for grey squirrel control. To support this work, NRW commissioned in 2020 a professional forest-wide survey (including grey squirrel control). This is an important piece of work as it includes significant parts of the forest that now feature a newly built wind farm. Regular conservation activity in this part of the forest has not taken place for some time. The results from the survey will help CRST identify further areas of the forest that need ongoing monitoring once full and regular access is allowed.

Of course, all of the above is dependent on finances and how well as a group we do with our fundraising efforts! With this in mind, CRST is working in partnership with Red Squirrels Trust Wales to gain future funding from the Welsh Heritage Lottery Fund (HLF).